Ice does not play nice with impurities and particles. Everyone’s expelled as ice grow. Anything initially dispersed or suspended in water will thus be concentrated between the ice crystals upon solidification. We’ve taken advantage of this increase of concentration to trigger self-assembly of various systems.

The first system we looked at are anisotropic platelets. During this freezing-induced concentration, the platelets get nicely aligned by the crystals. We’ve taken advantage of this to develop some peculiar bioinspired ceramics with unique mechanical properties, inspired by the microstructure of seashells.

When block copolymers are close enough, they self-assemble into a variety of superstructures such as micelles, depending on the temperature and concentration. The required increase of concentration is usually achieved by drying, at room temperature. We’ve demonstrated that the growth of ice can trigger the self-assembly of block copolymers into micelles, and then the self-assembly of these micelles into further superstructures. In situ SAXS experiments at Synchrotron SOLEIL involved. 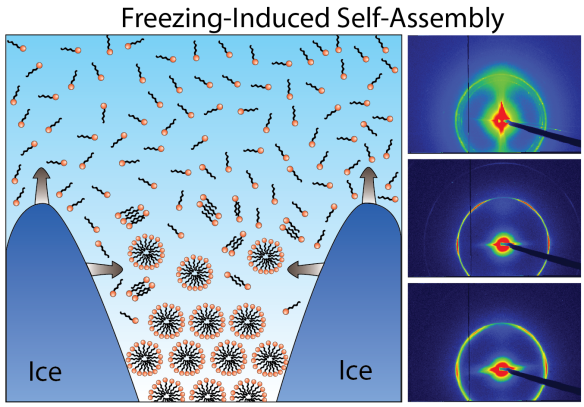